Does your baby love their bottle and are you worried about finally getting them to kick the habit? As your baby gets older and they start eating more solids, their bottle should be replaced with a cup.

It’s important to not allow your little one to bottle feed with no end date, as this can cause problems both of you will need to deal with later.

When Should Babies Stop Drinking From A Bottle?

Many pediatricians and pediatric dentists agree that weaning babies off their bottles should start by one year of age. According to the American Academy of Pediatrics, babies should be weaned off bottles by 15 months.

Effects Of Bottle Feeding For Too Long

While giving your baby a bottle may seem harmless (especially if they find comfort in it), it’s not great for their teeth. This is not necessarily because of what’s in the bottle. Even after weaning your child off a bottle, you can continue to give them milk. Also, the occasional bit of juice is fine, too, however, “Sucked from a bottle though, the sugar and acid will stay longer on their teeth, which could lead to cavities,” explains WebMD.

Older babies over a year old feeding off bottles for comfort as well as hunger may be filling up on liquids, resulting in them not getting the nutrients they should be from solid foods.

If they’re drinking too much milk and not eating enough solid food, they won’t be exposed to the variety of flavours out there.

Plus, giving a baby a bottle to sip in their crib for comfort can increase their risk of ear infections.

What To Give Them Instead Of A Bottle

You could replace their bottle with a sippy cup, or skip straight to an open cup.

Sippy cups are super convenient as they’re spill resistant meaning less cleaning up. They’re also portable, so your little one can carry them around.

However, taking away the bottle isn’t just about replacing it completely with a sippy cup. Drinking from a sippy cup all day long can still result in similar effects of bottle feeding, namely that your little one will get full on liquids and not develop good solid food eating habits.

Also, as What To Expect explains, “…extracting liquid from the sippy is a slower process than drinking from an open cup or even a cup with a straw, so fluids like formula, pumped breast milk and milk (for tots over the age of 1) spend more time bathing the teeth with sugar.”

Drinking from an open cup can be a skill your little one learns before the age of two.

How To Wean Your Baby Off The Bottle

Don’t try and wean your little one off the bottle if they are stressed. Taking away the comfort of their bottle during a routine change, tiredness, or sickness will make weaning even more of a struggle.

You can try the cold turkey approach, but this might not work. It could just cause your little one a lot of stress.

Take the weaning process slowly by switching out one feed at a time. For example, if your baby gets four bottles a day, in the first few days, replace one bottle with a cup or sippy cup. Once that shift has become normal, replace the next bottle and so on. Start off with the least important bottle – normally the midday one.

Pull their highchair up to the table and give them their cup. This will also get them used to eating during meal times instead of taking their sippy cup with them wherever they go.

A bottle is sometimes a source of comfort for little ones, so struggle can be involved when encouraging them to change to a cup. Remember, weaning is a process. Starting at one-year-old will be easier than trying to get them to stop demanding a bottle when they’re two.

Are you getting ready for a baby, but feeling overwhelmed? Get the Essential Truths: a Guide to Birth, Babies, and Breastfeeding. This free guide includes my Postpartum Plan, the “trick” to getting more sleep, and tips for a successful start to breastfeeding. 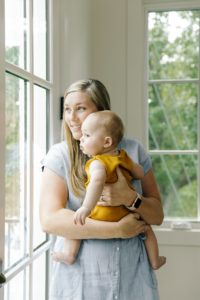 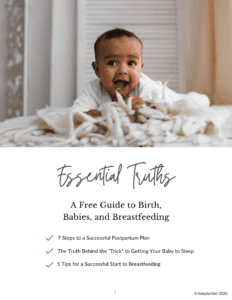